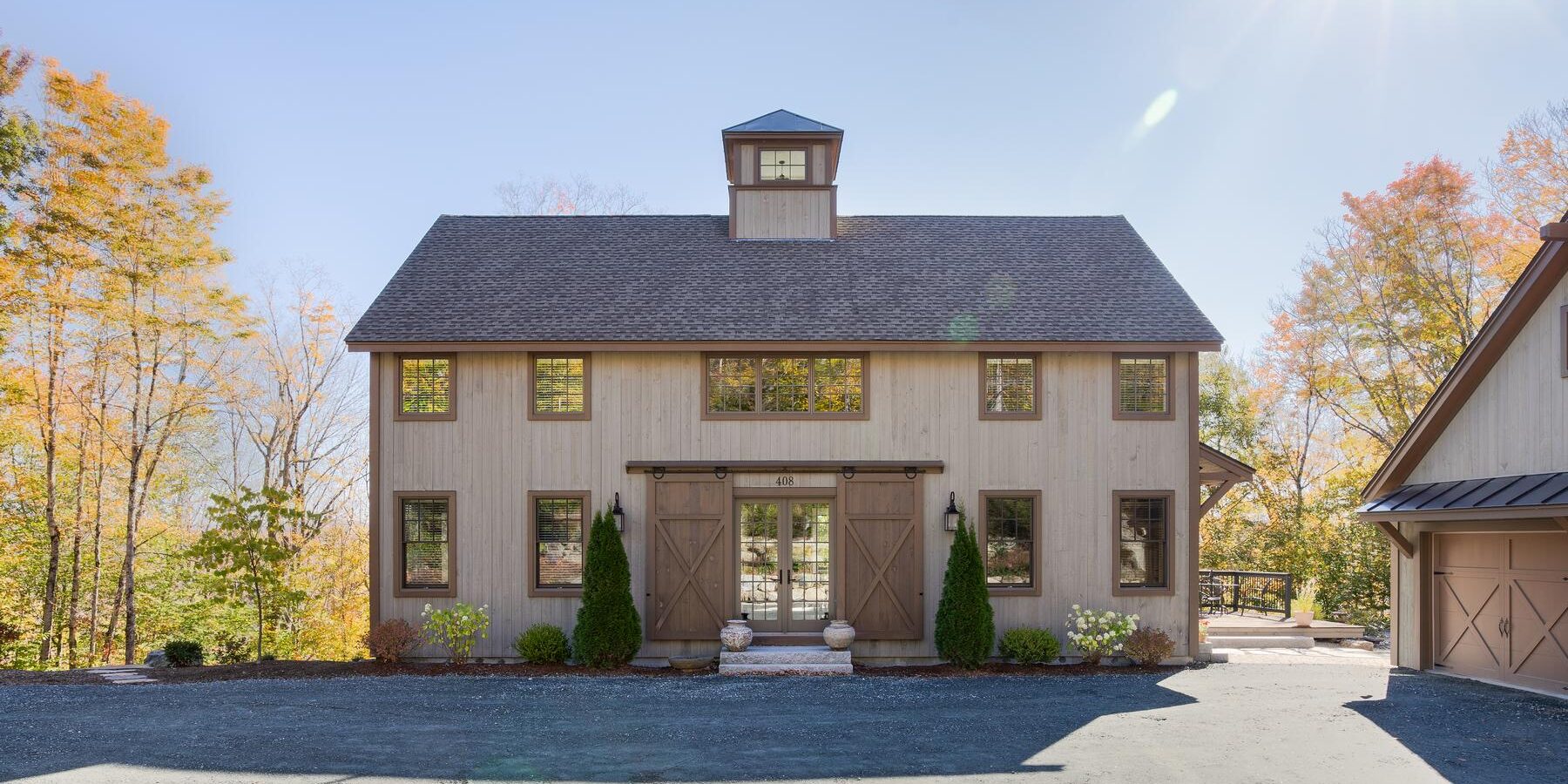 Today’s popular architectural styles naturally lend themselves to a post and beam/partial post and beam build. Open spaces with fewer walls, more options in design layout, and vaulted ceilings are just three of the key features a post and beam home affords.

Having these choices available means greater design flexibility. In turn, this will likely mean greater value in your build.

Current popular architectural designs such as the barn house, farmhouse, contemporary/Mid-Century Modern, cottage/bungalow, and mountain lodge styles are all possible with a post and beam build. Not only possible, each of these styles was originally built using a timber frame skeleton. Consequently, today’s versions can easily be likened to the original features of each design.

The barn house is a straight forward design. Often using a rectangle footprint with little or no bump-outs, the barn house is the most open of all open-concept floor plans. Rooms flow one to another without so much as a change in flooring material or ceiling height to define them.

Reclaimed timbers are used as statement pieces such a a fireplace mantle or decorative beams. Texture and mixed materials lend themselves naturally to today’s barn homes. Board-and-batten siding and timber-framed details exist side by side. Exterior paint colors are usually red, white, or muted shades of yellow or gray. Interior paint colors are soft and often distressed for an antiqued appearance.

The farmhouse style shouts American rural architecture. Typified by its simplicity and a large front porch, the farmhouse is easily one of the most-often replicated architectural styles in the United States.

A steep pitch roofline, sometimes topped with a cupola, is a clear indicator of farmhouse design, as are the traditional two-over-two windows, always symmetrically placed with the front façade of the house. In some parts of the U.S., dormers have been incorporated to offset the steep pitch of the farmhouse roof.

Classic exterior color remains white, though some owners have chosen to use yellow or gray.

A truly American architecture style, the original Mid-Century Modern was intended to blur the lines between inside and out, through use of large expanses of glass, angular lines, and natural elements such a stone and wood.

The mid-Century Modern aesthetic was meant to be futuristic with form and function taking center stage. No frills, embellishments, or decorations were added to the house design.

Historically, the term ‘cottage’ denoted the dwelling of a cotter (a worker of the land). The cottage house was modest, with a typical arrangement of two rooms on the main level and two rooms on the upper level. Today, when people think of cottages they often envision these small houses. The term is often used to refer to a vacation property, usually situated near water or on a secluded site. However there are also urban cottages, particularly the bungalows popular in the 1940’s & 50’s. Many of today’s cottages are used as primary homes.

Modest in size, cottages/bungalows are built to the needs of the people who will live in them. Each square inch in a cottage is useful and serves a purpose. For this reason, they are extremely popular with Baby Boomers and those looking for downsize. Cottage/bungalow interiors are informal, encouraging flow from one room to the next. Their relaxed nature invites visitors and owners to feel at ease.

Color choices for cottages and bungalows reflect the natural surrounding elements, particularly the soft colors found in a cottage garden.

Mountain architecture in America came from the period in U.S. history when people chose to venture into the untamed mountainous areas of the country. The structures they built were a direct response to the environment they were in. They had to be made from native materials and they had to be sturdy to withstand harsh weather and deep snow. Unmilled logs, rough timbers, and natural stone were the norm, and the rustic beauty of these materials became a part of the style.

Colors used are those most closely related to wood tones. Soft browns and deep hunter greens are a classic color combination.