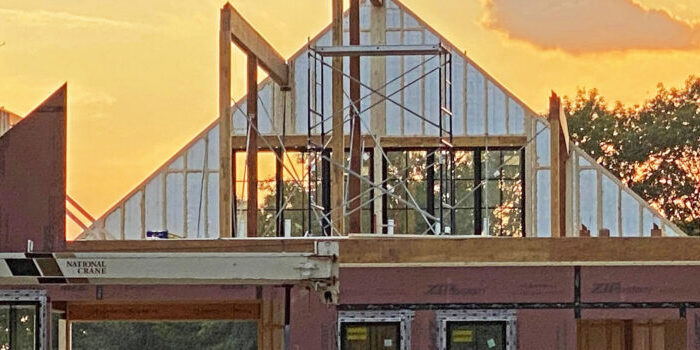 1. What is panelized construction?

In the high-tech approach known as panelized home construction, pre-engineered wall and roof sections are produced in factory-controlled conditions, then shipped complete to the building site for final construction. Yankee Barn Homes also includes windows factory-installed in the wall panels (exception, some specialty windows) as well as the TJI’s or LVL’s with Advantech subfloor for any second story living space. Some panelized manufacturers complete the on-site build via general contractors (professional home builders). This is the case with Yankee Barn Homes. It is the GC who completes the first floor deck once the foundation is in.

Panelized homes are a better-quality home than conventional stick framing thanks to better airtightness, better lumber quality, and more. If a builder looks at the full costs of a traditional stick frame home versus a panelized home built from prefab components, panelized homes can be less expensive. However, adding a partial or full timber frame to a design does increase cost, but this is equally true for stick frame homes that include timbered posts and/or beams.

2. What is a prefabricated panelized home package?

A panelized house package is a prefabricated home that typically includes a roof, wall panels, and floor systems that are first assembled in a factory, then delivered to the construction site. When building a panelized house package, the foundation is laid first, then the panelized walls, floors, and roof that were manufactured off-site are put into place.

3. Is a panelized home the same as a modular home?

As stated in # 2, a panelized house package is a prefab home that typically includes a roof, wall panels, and floor systems assembled in a factory, then delivered to the construction site.
A modular home is made of one or more prefabricated modules that are grouped and/or stacked to form larger home structures. Modular homes are first completely factory-built in pieces. When complete, those modules are then loaded onto a truck and shipped to the construction site. This is why they are sometimes referred to as “factory-built” or “system-built” homes.

*To avoid confusion, remember that a modular home is not the same as a “mobile” or “manufactured” home, which are commonly called “trailer” homes because they can typically be hitched to a vehicle. 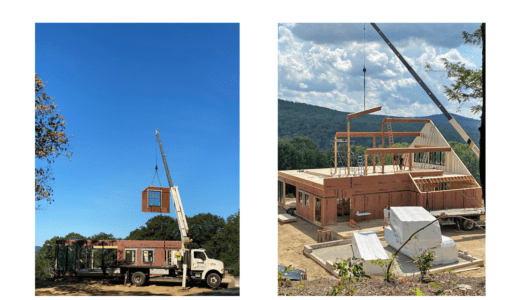 4. Are panelized homes a good investment?

Yes, because:
A) You Can Build Panelized Homes Faster
Time is money, and panelized construction saves a lot of time compared to modular. Panelized homes can be put up in a matter of days, and they can be finished in as few as 16 weeks. Modular homes, on the other hand, typically take longer to complete. They also require special equipment to lift and place the modules on the home construction site.

B) Prefabricated Panels Create Less Waste
Both modular and panelized homes result in far less waste going to landfills, because much (or all) of the construction takes place in a factory. Lumber is cut by machine, which makes the measurements more precise, resulting in less lumber being wasted.

C) Panelized Homes are Stronger
When it comes to strength of construction, it’s hard to beat panelized homes. They’re built in a factory and precision engineered to be airtight and strong. Modular homes are constructed more like traditional stick-built homes, except that they’re completely built in a factory. Although they can be built with strong panels, most are not, which makes panelized a better option for strength.

D) Prefabricated Homes are Healthier
All prefabricated homes are either partially or entirely built in a factory, therefore, the materials aren’t subjected to rain and snow, which can result in mold, mildew or in extreme cases, rot.

Frame Options Offered at Yankee Barn Homes
May 18, 2022
Sign up for blog updates
Our Instagram feed
Looking for that perfect barn-house style with all

Sands Point is a Hamptons Design from @Jeffrey_Ros

Cloudy or not, our Somerset Barn Home is a stands

The Downing barn house is a smaller post and beam

Happy 1st Day of Summer 2022 from our very own Sum

An updated photo of the Menemsha Cottage in all it

Good morning from the Springfield post and beam fa

Either way you look at it, our post & beam mountai

Mad River Modern is a great example of our post an