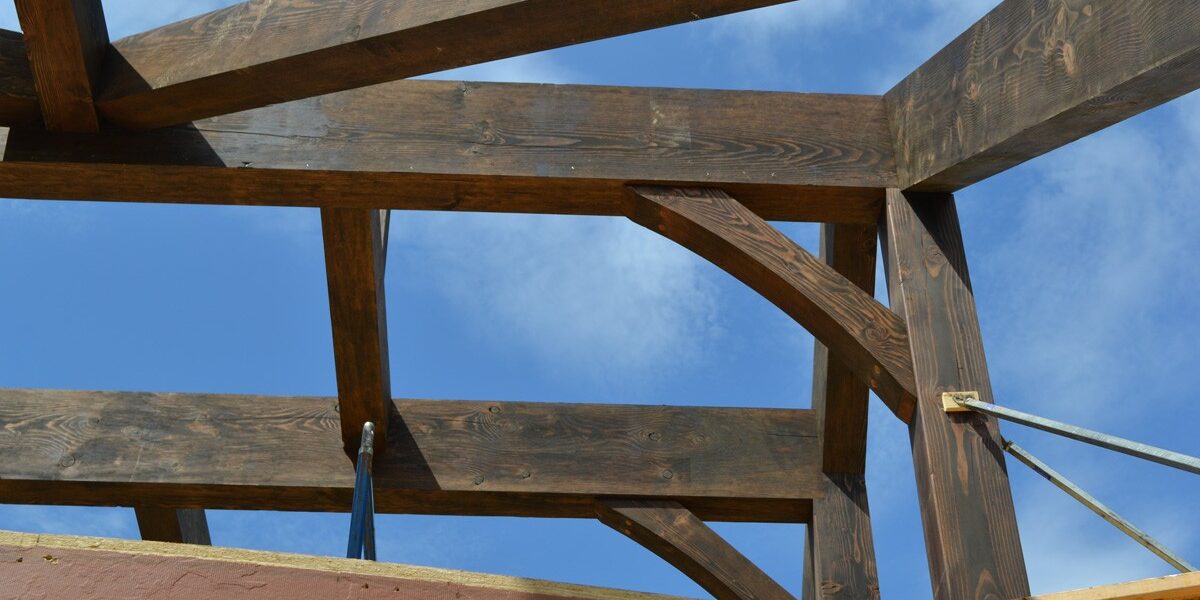 There may be times during the post and beam build-process when industry people use certain terminology that some of us might not know. This happened to me more than once when my husband and I were building. I could have used a “cheat sheet” of terms and felt others might feel the same way.

Anchor Bolt: A bolt set at the top of the foundation; used to secure the wood structure to the concrete foundation.

Apron: The bottom piece of window trim below the sill or stool.

Beveled: A corner created not by a right angle intersection but by an additional angled surface.

Butt End: To butt means to join end to end. The butt end refers to the flat end of a piece of wood.

Chamfered: The decorative quality of posts can increased by cutting off a small portion of the square corner leaving and angled (beveled) surface. The chamfer cut extends through much of the length of the posts but stops short of the ends.

Chase: A groove or channel for carrying electric wires.

Clerestory: A substantially windowed wall. The glass is often above a lower adjoining roof.

D: Abbreviation for penny. Penny is a weight measure used to categorize nails.

Downlap: To extend a material down and over the material below. For example, siding may downlap a concrete foundation. Opposite of uplap.

Ell: An extension wing generally at a right angle to the main house.

Flanged Door or Window Unit: The flange refers to a nailing fin on the edge of the unit used to attach the unit to the structure.

Flush: Set in a level or even manner to be in alignment.

Frieze Boards: Boards that form an ornamental band at the top of a wall.

Jig: A device used as a template or form.

Knee Brace to Rake and Fascia

Knee Brace: A timber at a forty-five degree angle that adds support to two timbers meeting at a right angle.

Lag Screw: A lag screw is a screw with a square or hexagonal head. Sometimes called a lag bolt. They are larger and stronger than regular screws.

Lower Girt: A girt is a lower beam. In a post and beam home, it can be a decorative beam on the inside wall of the house about 36” above the floor.

Milled Stool Cap: A window sill which is shaped (milled) during fabrication.

Mortise and Tenon: A mortise (hole or space) is cut in a post to receive a corresponding projection tenon from a beam.

Purlins: A horizontal timber used between timber rafters or sometimes a decorative beam above floor beams.

Rebar:  steel bars which are used in concrete foundations for strengthening.

Scarf Joints: Two ends of wood pieces are angle cut so as to interlock making the joint shed water out and down, away from the structure.

Sill: Pressure treated, rot-resistant piece of lumber between the foundation and the first floor deck.

Soffit: The finish board or area underneath the overhang of a roof.

Thermax Chamfer Strip: Wedge shaped pieces of rigid insulation placed just inside the intersection of wall and roof panels, or at the ridge.

Tongue and Groove: Formed by a groove cut in the edge of a material (usually wood) to receive a corresponding projection from the next piece of material in the course.

Valley: The intersection of two (not parallel) roofs creates one or more areas (valleys) of rooftop that tend to gather rain and snow, therefore must be flashed.

Wall Panels: Wall components that are pre-fabricated. Closed panels have wood sheathing applied to both the inside and the outside of the panel. Sometimes the interior surface is gypsum board instead of wood sheathing. Open panels have covering only on one side.

Zip System Sheathing or “Zip”: replacing Tyvek as the go-to house wrap, Zip is an energy efficient air barrier with a built-in water resistant coating that has enhanced durability.