The amazing strength of a Yankee Barn Homes post and beam frame was first reported on Post and Beam Living a few years back. The story is so astounding and such a wonderful testimonial to the fortitude of these barn homes, I felt it well worth repeating, this time around with an update on how the home appears today. I hope you find this story as astounding as I did (and still do)! 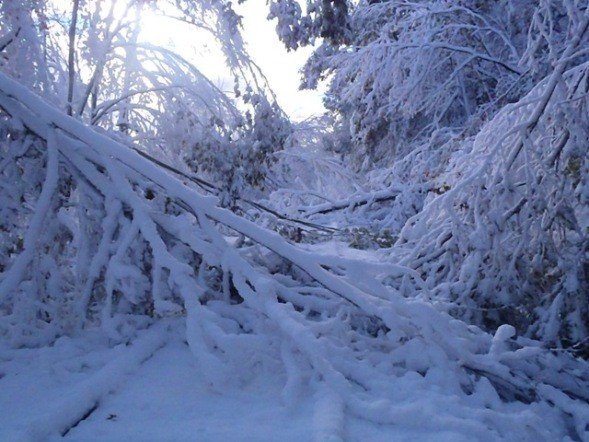 
Testimonial from a Yankee Barn Homeowner


“I live in a Yankee Barn that was built in 1979 – now 33 years old!  April 15, 2007 was not one of my better days.  In addition to putting my tax return and check in the mail, we were hit with a typical Spring Nor’easter.  I should mention that my Yankee Barn sits on a lot surrounded by towering Eastern White Pines.  The afternoon began with a heavy, very wet snowfall.  As dusk settled in, the snow ended and the winds increased dramatically.  My wife and I were sitting in the second floor balcony area of our barn watching television.  Shortly after the winds increased, the electricity went off.  We had anticipated this, as it happens often in our area.  We went downstairs to the Great Room and lit a fire in our fireplace, as no power means no heat.  It was not an unpleasant scenario – my wife and I sitting in front of the fire listening to the wind howl outside and enjoying a cocktail.” 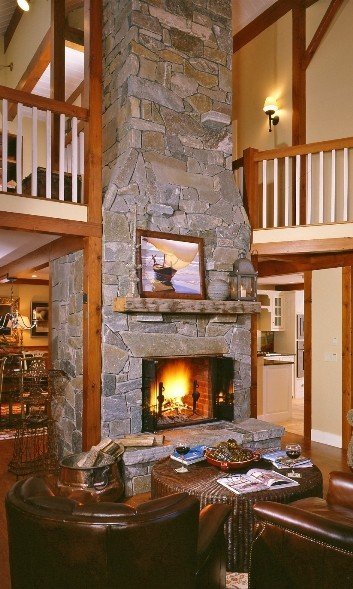 “Suddenly there was what I can only describe as an explosion followed immediately by a loud startling bang as stuff began flying through our great room.  Shingles, plywood, insulation and tree branches were everywhere.  A triangular shaped piece of shingle flew across the room and imbedded in the wall above my wife’s head!  We had no idea what had happened, except that there was an obvious hole in our roof and rain/snow was coming in. 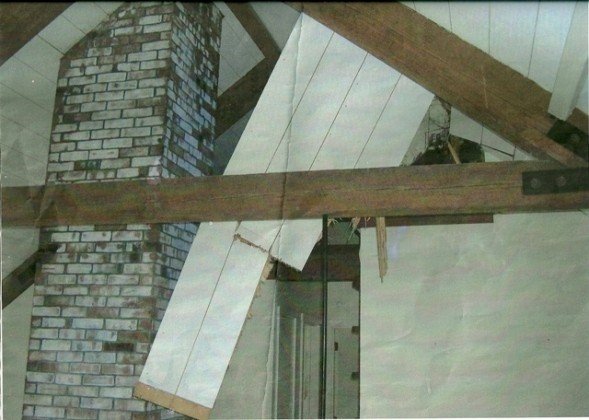 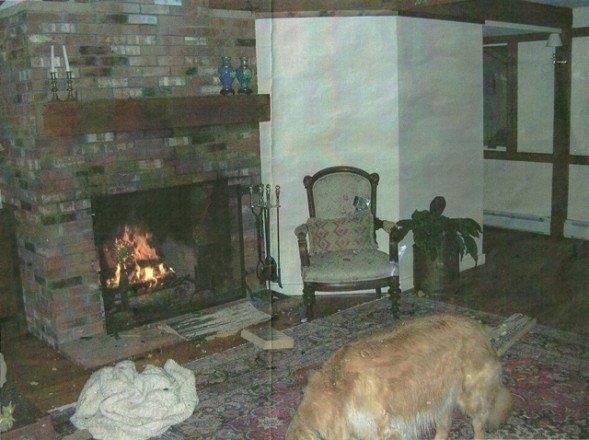 I tried to go out the front door and quickly realized what had happened; a huge White Pine was blocking the door. One of the taller Eastern White Pines had loaded up with the wet snow and as the winds picked up, the top half of the tree had broken off, traveled 30 feet in the air, and punched an 8’ x 8’ hole in the roof panel.  The trunk of the upper half of the tree, at least 3 feet in diameter, had actually hit the structure where the outside wall meets the roof and bounced off, due to its encounter with one of the Douglas Fir beams.” 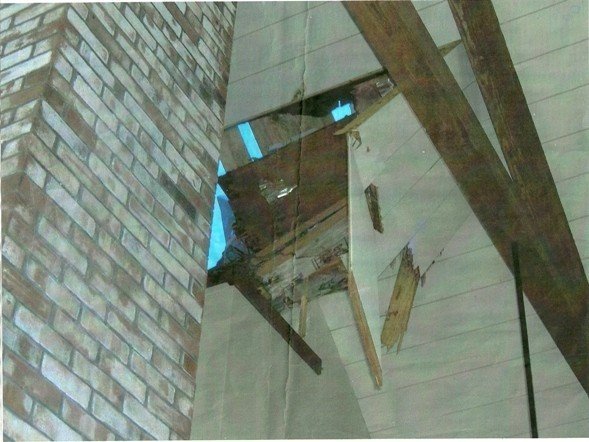 “In addition to the obvious repairs necessary to the roof, we had to call in a structural engineer to verify the integrity of our frame and structure.  The results were that our frame was 100% fine.  The engineer explained that the top portion of our post & beam frame actually moved 6” or so when the tree hit, and then returned to its original position when the tree bounced off.  He further added that had we been in a normal stick-built structure, that tree would have been in our laps! 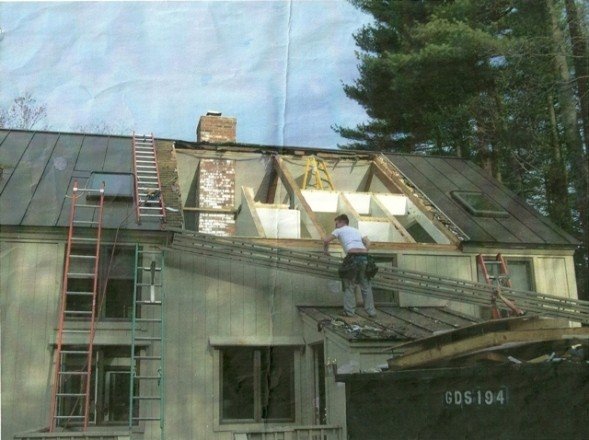 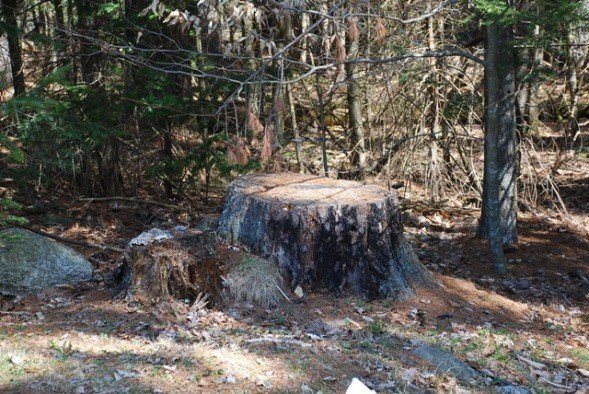 I am now a believer in the amazing strength of these barn homes. “ 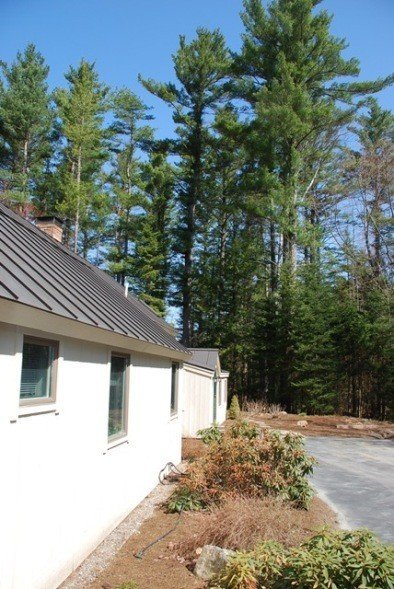 Bob and Leila’s amazing story has a very happy ending not only for them, but for their Yankee Barn home, as well. Here is their house as it appears today; you’d have no clue a massive tree had once fallen literally into their home! 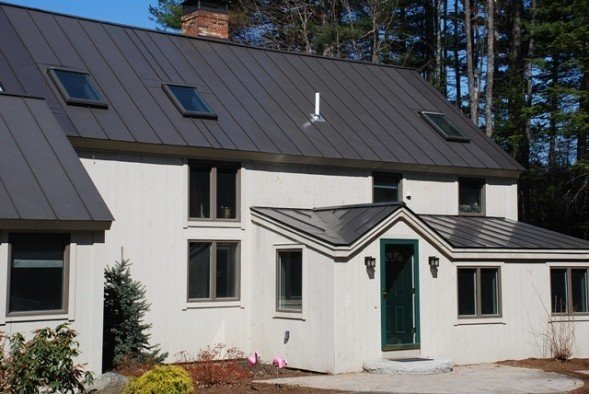 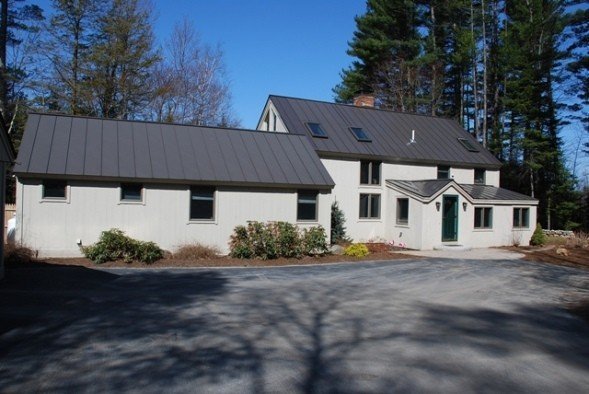 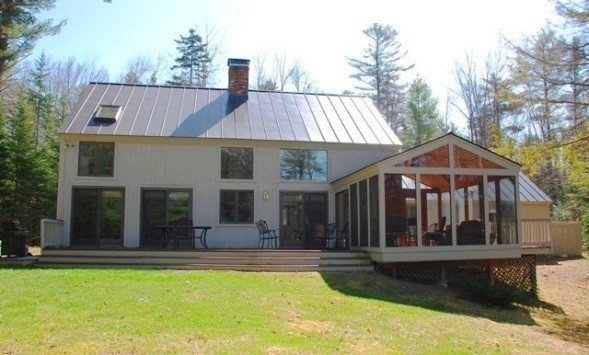 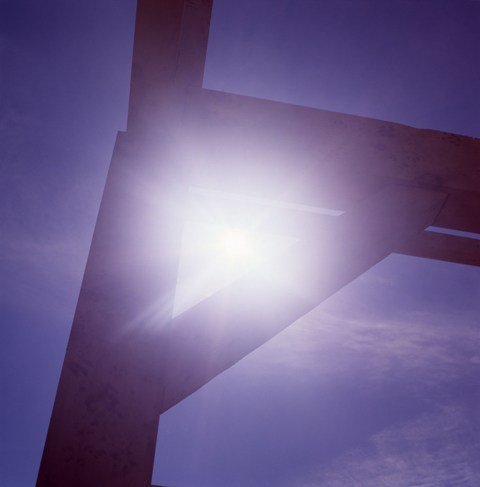