A Kitchen Design Dilemma Becomes A Work of Art

I was recently involved in a major remodel of a large kitchen which incorporated a Viking cook-top with a built-in down draft system. We had great plans for the back splash area. It was going to be a very chic tile I’d seen in one of my favorite magazines, Veranda, and become the focal point of the kitchen. Well, you know what they say about the “best laid plans…” 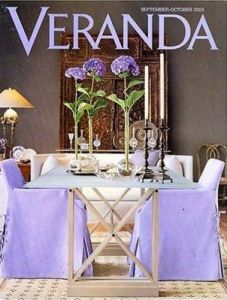 Veranda is one of my favorite decor magazines.

The one original detail we needed to work around was the fact there was no overhead draft system for the cook-top and to install one would have meant major demolition and reconstruction. Okay, no problem, we’d already considered this and had purchased a cook-top with a built in down draft system. With the flip of a switch the draft system popped up when needed. We were good to go, or so we thought, until it was time for the installation. 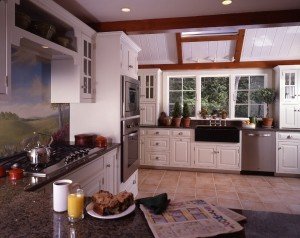 This kitchen remodel was extensive.

We quickly realized there was not enough room on our counter for the cook-top, the pop-up down draft system and the gorgeous tile. I was distraught. Now what were we going to do? We couldn’t get another cook-top as the Viking system was the only one that would work in our situation. The tile had to go. I was not only heart-broken but also a bit panicked. Luckily, we had not yet purchased the tile so we weren’t out a dime there, but we were in a bit of a quandary. This is where I have to stress good decorators are worth their weight in GOLD! Ours came up with the perfect solution – a mural on the wall behind the cook-top. It was perfect; what’s more, it turned out to be the focal point of an already spectacular kitchen. 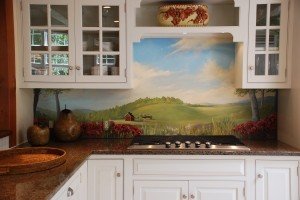 What’s not to like about a working piece of art!

Our mural was created and painted by local artists Peter Walls and Christina Neuser. They asked us what we wanted, did some preliminary sketches for us and off they went with their paints and brushes to create magic. Once completed, the mural was given a coat of sealant; no matter what gets flung on it from the cook-top, it washes off with ease. I know as I’ve tested it more than once! 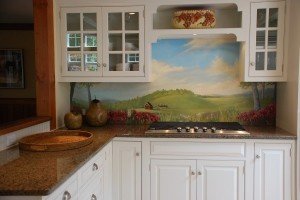 The detail in this mural is amazing.

Our initial dilemma was now a literal work of art. We were thrilled. Take a design conundrum, add one fabulous decorator and two gifted artists and PRESTO, you get a far better kitchen focal point than you could have possibly imagined!

Editor’s Note: This mural may be seen in the Yankee Barn Homes model house located in Grantham, NH. 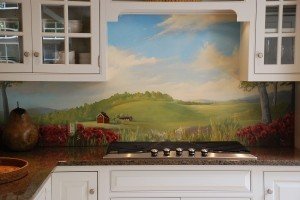 My favorite feature of this mural is the sky; the clouds are beautifully done!